Sports and sporting activities have always been held in high esteem by our society for building a healthy body besides providing invaluable entertainment to our mundane life. The city of Siliguri too hosts numerous matches and sporting events for the improvement of its young athletes and the entertainment of the general population.  Some of the important local clubs in Siliguri which aid the growing sporting enthusiasts are Bagha Jatin Club in College Para for cricket, S.A.I or Sports Authority of India in Kanchenjunga Stadium playing football/soccer and athletics, Agragrami Club in Ashram Para playing cricket, Dadabhai Sporting Club in Deshbandhu Para where volley ball and cricket are played besides many others clubs.

With the provision for an international outdoor and indoor stadium, Siliguri has enough opportunities to host national as well as international level matches. This has also led to Siliguri being a prominent town to produce national champions like Mantu Ghosh who was the Gold Medalist winner in the bi-annual South Asian Games (SAF) for table tennis, Nandita Saha another internationally acclaimed table tennis player and Wriddhiman Saha , the Indian international cricketer who is playing for the Kolkata Knight Riders of the Indian Premier League.

There are two main stadiums in Siliguri for outdoor and indoor sporting events: 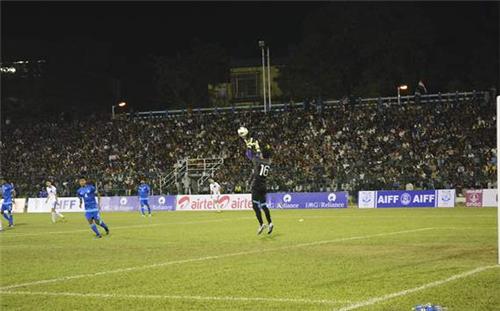 The people of West Bengal have had a passionate and ardent craze for football and Siliguri situated within the state is no exception. The Siliguri Mahakuma Krira Parishad organizes football tournaments and other football events, selecting teams from different clubs and in general promoting budding footballers in North Bengal. Some of the football coaching centres in Siliguri are Dadabhai Coaching Centre, Morning Coaching Centre, Indian Footballer’s Association’s Siliguri Centre, Netaji Football Coaching Centre and Siliguri Football Academy. These clubs give a platform for young football aspirants to learn the game, get sponsors and showcase their talent to the soccer lovers in the region. All the major football tournaments are held in the Kanchenjunga Stadium in Siliguri, which is the only outdoor stadium in the city to host national as well as international matches.

Cricket is the most watched and celebrated sport in India and a lot of youngsters play the game including gully cricket in the country. Siliguri too has its loyal cricket base and most of the cricket matches are held in Kanchenjunga Stadium including a few Ranji Trophy as well as Deodhar Trophy matches. Some of the local coaching clubs which nurture young cricketing talent includes the Agragami Sangha which was established in 1962 and is situated in Haren Mukherjee Road, Hakimpara,apart from the Siliguri Cricket Coaching Centre in Babupara. The Agragami Cricket Coaching Centre in Siliguri has been given a boost with the inclusion of Wriddiman Saha who is a student of the academy into the India Red Team for Challenger’s trophy and subsequent into the Kolkata Knight Riders (KKR) team for IPL. The club have practice grounds, sporting equipment and gym facilities for players.

Other Sports in Siliguri

Some of the other indoor and outdoor sports played by people in Siliguri include table tennis, taekwon-do, badminton, lawn tennis and chess.  In fact the city is renowned for being the training grounds of great table tennis players. Proximity to the Teesta River has made white water rafting another favourite sport for water sports enthusiasts.